After the article on New York Times  that mentioned Italy for its food in its last lifestyle list, Italian has been celebrated more than ever but expecially South Italy food and raw food is under the interest of many VIP. 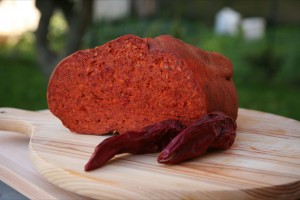 ‘NDuja, the Queen of Calabrian salami

Let’s start mentioning HER Majesty the Queen of England who is very fond of Tropea’s onions and every month orders tons and tons of this vegetable,  believing it helps with its anti age elements.
Hard Rock Café the multinational brand is starting to introduce Calabrian chilli made products in their menu all over the world.
And the famous chef Vissani has an eye on (following on Twitter) the Cooking soon team , a group of brand new chef, the new generation of Calabrian restaurant manager that mingles old tradition with new exciting ingredients.
Cooking soon team is composed by Nino Rossi, Luca Abruzzino and other 6 young talented chef.
They introduced themselves in a wonderful  cooking exhibition at Castello Svevo on 2015 but they also have their own restaurants too.
Nino Rossi for example at Santa Maria Cristina (in the RC district) after managing a manor farm dedicated only to host events and catering for weddings (weddings are very special events in Calabria something similar to indian ones), decided to open him self to new experience and invented Qafiz , a smaller restaurant with only ten tables where he can free his fantasy . And no doubt that Nino Rossi’s creativeness limit is the sky. But the result is beyond any expectation.
Calabria is an area with a peculiar shape , long and narrow with high mountains  and huge beaches. It means that even the smallest districts has its own tradition expecially in food, not to mention the old communities of arberesh (people coming from Albania in Xv century….), grecanic area (last greek colonies melted with locals), Valdese community (a protestant bunch of people arrived here during XVI…persecutions.
So if you want to know something more about special – calabrian food, follow me;

Let’s start with the famous NDuja, definitely the Queen of Calabrian salami. It’s a spicy and colourful paté of pork that you can eat smerared on fragrant slice of bread, excellent too as pasta sauce or savoury sauce for pizza.
Its name comes from the latin words inducer, meaning introduce, referred to the action of stuffing pork meat and fat inside pig’s intestine as a bag.

Other writers link the name to the French term “Andouille” which means sausage.
The best Nduja is made with best part of fat and pork meat . The true nduja doesn’t not contains nerves or cotenna which are the lowest qualities components of pork. 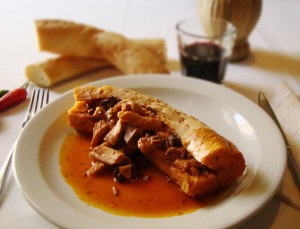 The meat is put on a intestine budello adding chili pepper and wild fennel.

Mocerddu in Italian Morzello is the specilaities of Catanzaro. It is made with the entrails of calf (liver , heart, tripe and gut) cleaned with lemon and salt for 3 hours , then boiled in their own fat for at least for four hours. After that tomato concentrate is added.
Another recipe melts tomato concentrate with entrails during  boiling procedure to arrive to similar result. You can add a bit of spicy  and Catanzaro citizens say that if you don’t taste Morceddu, it is like you’ve never thrown a coin in Trevi’s fountain in Rome. 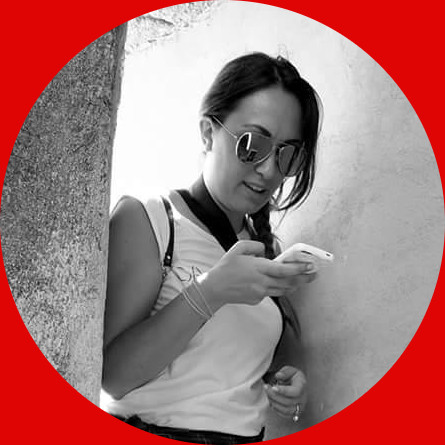